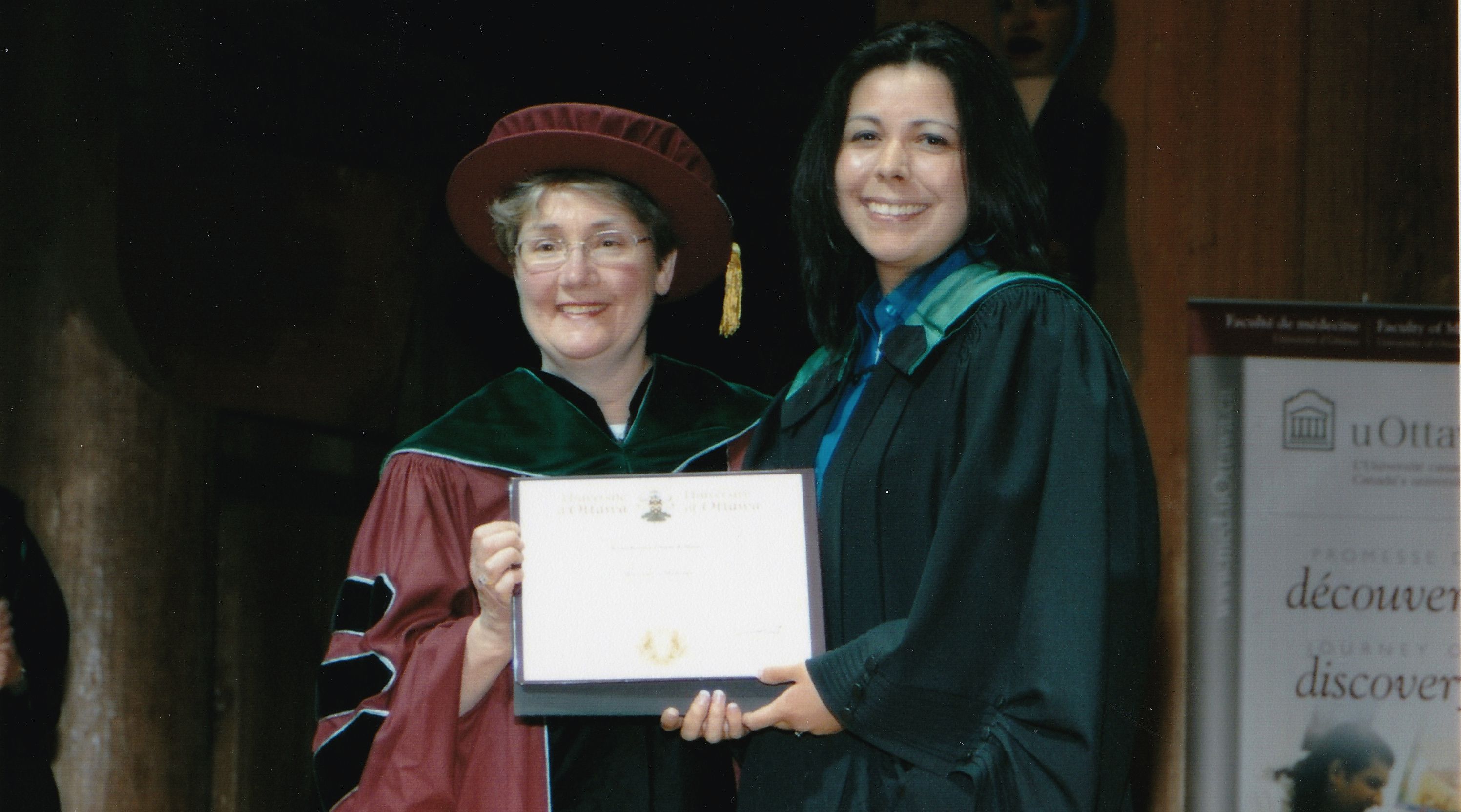 Kona Williams (MD ‘09) had no idea what kind of doctor she wanted to be when she started medical school in 2005 as part of uOttawa's Aboriginal Program. That all changed when she heard Dr. Mary Senterman explain metaplasia, dysplasia and anaplasia, three different ways that cells change.

“It was so straightforward, I just never forgot it,” said Dr. Williams, who at the time knew nothing about pathology.

She began to explore this branch of medicine in elective courses with Dr. Senterman during her four years of medical school — and then pursued the specialty for another five years as an anatomical pathology resident at the Faculty of Medicine.

“Dr. Senterman got me absolutely hooked,” she said.

After 14 years of post-secondary education that also included a one-year fellowship at the University of Toronto, Dr. Williams was hired in January by the Ontario Forensic Pathology Service. The Toronto facility provides forensic services to police forces across Ontario.

“The things I see are disturbing and can be traumatic for somebody who hasn’t gone through all the years of training,” she said. “But I realize I have a job to do. I not only have to figure out how this person died, but also give answers to the family, to the public and, occasionally, in a court of law.”

Her father, Gordon Williams, is Cree from the Peguis First Nation in Manitoba and her mother, Karen Jacobs-Williams, is Mohawk from Kahnawake.

Her father, who participated in the Truth and Reconciliation Commission as an Elder, used to work before retirement for the federal department now known as Indigenous and Northern Affairs Canada. Her mother also worked for the department and with the Aboriginal Healing Foundation, which addressed the intergenerational effects of abuse suffered in the residential school system.

Dr. Williams’ family moved around a lot before settling in Ottawa when she was in high school. Education was always an important focus.

“My dad went to a residential school and he was determined that my brother and I were going to get a good education and go farther than he did,” she said. “He went through that, got himself through university and, despite everything, he is where he is today. I’m super-proud of him for that. I know it couldn’t have been easy.”

Dr. Williams said the Aboriginal Program was a key reason she decided to study medicine at uOttawa after completing an honours bachelor of science degree at Dalhousie University. The best thing about the program was being surrounded by other First Nations students, she said. “It was a good support network.”

The Faculty of Medicine’s Aboriginal Program was established to encourage First Nations, Métis and Inuit students to study medicine, with seven places reserved each year for Indigenous candidates. The program includes group social activities, access to Elders and mentoring, as well as Aboriginal-specific content and traditional healing methods incorporated in the curriculum. About 60 Indigenous students are attending or have graduated from the program.

“It’s not for everyone”

Dr. Senterman says it was a delight to mentor Dr. Williams over the years, and recalls that her talented student was involved in two research projects during her time at uOttawa that were written up in peer-reviewed journals.

“Forensics is a very specialized part of pathology, and it’s not for everyone,” Dr. Senterman said. “I am so proud of her. She is like my surrogate daughter.”

“There’s a lot of mistrust between First Nations communities and the death investigation system, unfortunately,” Dr. Williams said. “You have deaths that happen in the communities and people don’t get the report, they don’t know what’s happened with their loved ones. There’s a lack of communication.

“We want to avoid these situations. We want to get information out in a way that is respectful and timely, and see bridges being built. I think that is part of where my role is going.”

Dr. Williams hopes to inspire other First Nation students to pursue careers in science and medicine.

“I think it is important to get youth involved and interested, and to show them that I am not super-special – I am not some genius who did this. In 10 years, I don’t want to be the only one.”

This story originally appeared in the uOttawa Tabaret.